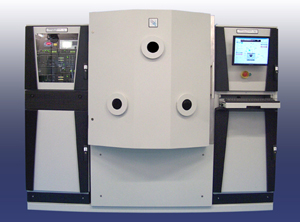 to find the right technique that benefits you.

There are numerous processes when it comes to the manufacturing of optical thin films. Some of the most common methods include: thermal, ion beam evaporation, ion beam assisted deposition, and ion beam sputtering. Each method provides its advantages in the formation of optical film and each provide value and limitations.

When it comes to coating manufacturers, you’ll find that many of them use only one of the methods rather than multiple to make it appear that a single approach is more beneficial.

Ion beam deposition is a variant of the e-beam evaporation process. E-beam evaporation adds a high-energy ion beam that is directed at the coating substrate. The ions tend to act like an atomic hammer that produces a high film density – much higher than evaporation alone. Furthermore, ion beams cal also be utilized to pre-clean and etch the substrate’s surface to improve its’ overall film adhesion. The result of this high coating density is an improved mechanical durability, greater environmental stability, and a lower scatter – without the use of electron beams.

Ion beam sputtering coats are produced within a vacuum chamber. When it comes to IBS, high-energy ion beams are directed at the target – which is typically a metal or an oxide. The ions then transfer the momentum towards the substrate causing molecules to sputter off. The high-energy atoms are then deposited as coats onto the substrate. Throughout the process, oxygen is typically present at low pressure within the coating chamber to act as a reactant when creating oxides on metal targets.

Some advantages to using ion beam sputtering include: extremely uniform results, high density, excellent adhesion, and environmental stability. Furthermore, the surface roughness of the deposited layers is extremely low, which tend to yield infrared and visible levels. Deposition rates are relatively low when compared to other coating styles. But, the control and reproducibility levels are high, which makes it possible for performance targets to be hit with a greater precision than most evaporation techniques. This is beneficial for the user, because of the production of steep edge filers and multi-wavelength mirrors. Additionally, this process can occur through full automation, meaning that it does not require the supervision of an operator. One of the biggest drawbacks to IBS however, is that it only works with a limited range of materials  – typically metal oxides.
—————————————————————————————-